I’ve had other dogs but nothing prepared me for adopting the frightened and broken spirit that entered our home. A girl I called Raven.

She had been found wandering the rural roads of the South Shore of Nova Scotia with another dog that, unfortunately, was hit by a truck and died. A kindly stranger said that it had taken him over a week of putting food out and talking to her to be able to coax her into his home. Once he had her safely in the house, he called animal control. She smelled faintly of skunk. It was through animal control that I heard about the timid dog that probably would never get adopted because she shied away from everyone.

When I brought her home, she took up residence under a cushioned bench in one of the bedrooms. I would sit on the floor beside the bench, feeding her one handful at a time. That was how she learned her new name.

I would hold the food in my palm and say, ‘Raven’ in my most singsong-y voice until she would look away from the wall and at me. When she did, I dropped the food on the floor near her head and she would gobble it up.

‘Good girl,’ I said in a soothing tone. And we’d repeat this until her food dish was empty. After she was done, I’d scratch her neck, which she seemed to absolutely love. I did this for two weeks. When I finally decided she knew her name and trusted me, I put the food bowl on the floor near her face. To my dismay, she reared back as far as she could go, her paws slipping on the hardwood floor. I realized she had probably been beaten with her own food bowl. My heart broke.

Raven did not come out from under her bench for six months, except to do her business outside. She was terrified of everyone, including my husband. When she first came to live with us, I would have to take her into the backyard with a leash. We would walk from the bedroom, down a hallway and through the kitchen to the back door. She would walk very quickly in case my husband happened to pop up in the vicinity. I’d learned early to announce our imminent arrival at the kitchen so my husband had enough time to hide in the living room. She would put on the brakes and drag me back to the bedroom. She would not walk past him. Once out the door, we’d stop on the deck so she could check for danger. Sometimes, if the neighbourhood kids were playing in their yards, she would duck back into the house and scurry back under her bench. Even a passing car would send her back inside the house.

When I was finally able to walk with her outside without a leash, she would sprint back to the house and press herself against the door as soon as she was done. At least I knew she felt safe there. That was something.

After a couple of months, I would come home and be able to call her to the door. ‘Raven, do you want to go pee?’ I would sing. A few moments would pass, where I can only assume she was listening very intently for danger, and eventually I would hear the clicking of her nails on the floor in the hallway. Her head would peek around the corner, pause then hurry over to me. I still had to go outside with her, but I was glad I didn’t have to coax her out from under the bench.

Overtime, she could walk past my husband when he was in the kitchen, but she would cast a wary eye over in his direction until she was through the door.

We’d had her for about four months before she allowed Ron to let her outside. It might have been purely from desperation since I could not come home for lunch that day. She still refused to leave her bench for any other reason, but we considered that a victory.

But I worried about her living in that bedroom by herself. She ate there, drank there, slept there… spent her entire day there. I started calling to her from the bedroom door for her to get a treat. A few days later, I would call her from the end of the hall. Then from the living room entrance. Every time, she would gently take the treat from my hand and hurry back to her bench where she would eat it. I could delay this by giving her some really good scratches around her neck, but she would always return to the bedroom.

We purchased another dog bed and put it beside my chair in the living room. When my husband was away, I would call to her and ask her if she wanted a treat. She would slowly walk down the hall and pause, listening for danger, then continue down the hall until she peeked around the corner. I would show her the treat and toss it into the dogg bed. She would gingerly place her foot on the bed, pick up the treat and head back to the bedroom. Eventually, she could do this even when my husband was present, but she would eye him first before entering the room. He couldn’t make a sound or move or it would send her running back.

Desperate to have her be part of the family, I spoke with a dog trainer and they told me about a leash that attaches to your belt. The dog trainer recommended that I leash her to me and just go about my business in the house. It helped a little, but I wanted her to go for walks, enjoy being outdoors, have some sort of life outside the bedroom. So we adopted another rescue dog in hopes she would bond with him. That is how we ended up with Ruffles. It didn’t work because she didn’t know how to play no matter how hard Ruffles tried to teach her. But we loved Ruffles for it.

Eventually, she started coming out to the living room herself when I was home. She’d rest on her dog bed and enjoy the scratches, but when my husband spoke or Ruffles played too rambunctiously, she would slink back to her bench. It took a full year and a half and my being out of town a number of times for Raven to finally believe my husband would not hurt her.

My husband told me that one night when I was away, she approached his recliner and rested her chin on the arm. She’d wanted scratches, since I wasn’t there, he was the next best thing. He told me his arm went numb from scratching her. My husband felt so honoured that she trusted him, he wasn’t going to stop until his arm fell off. I had tears in my eyes when I saw her do it the first time.

After that huge leap of faith she took, little milestones were reached more quickly. She mischievously started stealing Ruffle’s toys and hiding them under her bed or under her bench. When the neighbourhood kids were playing a noisy game of basketball outside, she merely glanced their way and went out into the yard. She ran around the yard with Ruffles and would go into a play stance—her butt up in the air with her forelegs on the ground—tail wagging furiously.

Then she started insisting on going out the gate and down the driveway with Ruffles when my mother and I took him for his walk. Excited that she might finally come with us, I got her leash, but she couldn’t make it past the end of the street when a car went by. A few weeks later, we tried again and this time she went around the entire block even with cars going by and people approaching. She shied away but never panicked or tried to bolt. It was such a victory and makes me shiny-eyed whenever I think of it.

Unfortunately, Raven didn’t go on too many walks. The vet thought she was eight years old when we adopted her and she was probably about eleven when her hips started to give out on her. The slippery hardwood floors would give her a problem so we bought non-slip mats and laid them along the paths she usually took.

Then she started to decline, she didn’t always come and greet me at the door when I arrived home from work. She slept more and more. Then I found her sleeping in my closet. She even wriggled herself into my laundry basket in her attempt to find a safe place to hide and spend her last days. I set up a little nest for her made up of a shower curtain, a blanket, her water bowl, food and toys.

Then she stopped eating and lost the use of her back legs. She needed to be carried outside and we would lay her down under the trees where she would feel protected, sit with her then bring her back in when she was ready. When she couldn’t keep her water down, I knew it was time. My husband called the vet to come to the house. 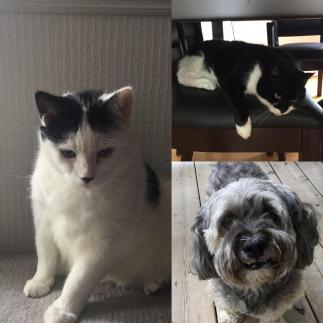 Our other pets somehow knew and came to sit quietly under the bed and watch. I sat with her in the closet, her head in my lap. Even in her weakened state, she lifted her head to look up at me. I loved her and she knew it. I was so glad that she knew that someone loved her.

She broke and mended my heart everyday that I knew her and I still miss the little healed spirit that I called Raven.

19 thoughts on “Loving a Fearful Dog”

Leave a Reply to A Dog Named Charity Cancel reply